Chat with us, powered by LiveChat The Benefits of Using Electric Netting - Chicken Coops and Tractors New Zealand

The Benefits of Using Electric Netting

The Benefits of Using Electric Netting 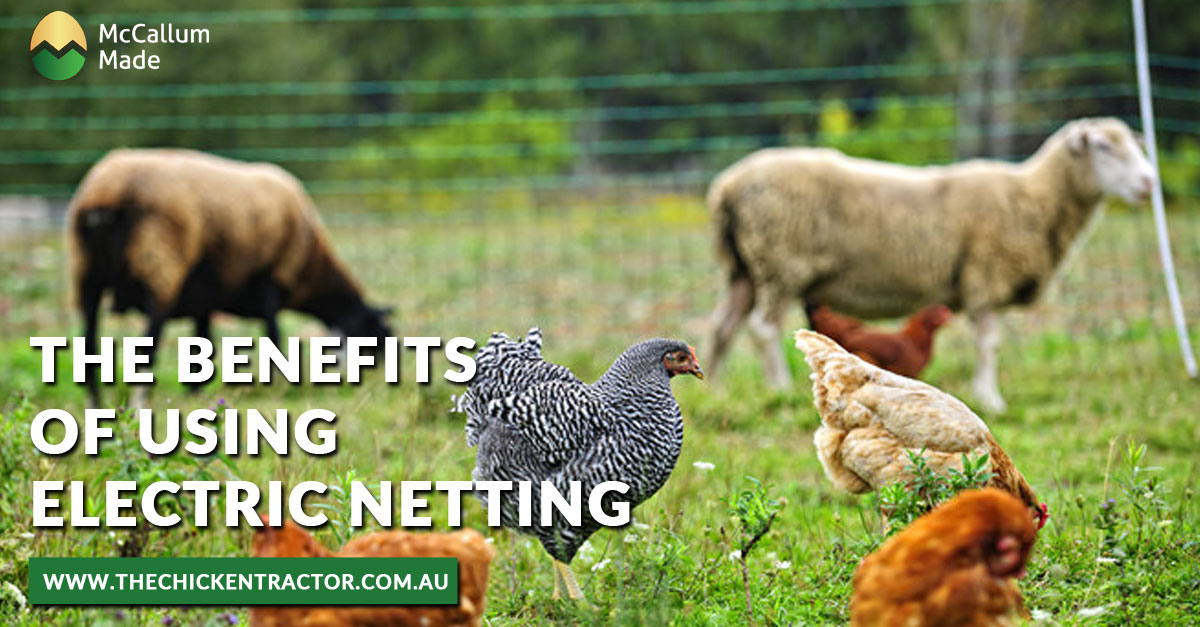 Electric Netting can be erected in minutes by anyone without tools. It is a simple, lightweight solution and the netting can be moved and set up repeatedly, making for instant protection of either livestock or produce.

Setting up an electric netting fence is a one person job. From start to finish the job can take as little as ten minutes as all you need to do is unroll the lightweight netting bundle along your chosen path and push in the posts. The posts are already incorporated into the net during the manufacturing process, so you do not need to do this yourself. You don’t have to dig any holes into the ground, the sharpened metal tips are easily inserted into most pastures. It is easy to replace or add additional posts to the netting if required. If working in hard soils, then it is best to use a hammer and a tent peg to “pre-drill” holes, and then simply put the post into the hole. All you need to do after erection is add electricity.

Electric netting is just as easy to dismantle and move as it is to install, which is the main reason that it is so popular among free range farmers and rotational graziers. With Electric Netting enclosure can be set up practically anywhere and moved when necessary. And due to the lightweight and non-bulky design electric netting can be stored away when not in use.

In Australia Electric Netting is most commonly associated with free-range chicken farming. However, there is a variety of animals and applications that it can be used for. Electric Netting can form easy enclosures for sheep, rabbits, goats, pigs and even your pets. However, electric netting isn’t just used to keep animals safe inside a pasture – as an electrified safeguard against predators. It can also be used to keep animals outside of gardens. Imagine how much more productive a market garden could if it was possible to keep the rabbits and wombats out! The versatility of electric netting is determined by the height of the fence and the gaps between the lines.

The height of our electric netting is from 50cm to 110cm and the height of the fence you select will be determined by which animal you are trying to keep in or out. However, height is not everything as the gaps between the lines of the net is an important consideration. The basic idea is that smaller animals require smaller spacing, regardless which side of the fence they’re on. It does not make sense to purchase goat netting and then hope it will be effective against rabbits. All electric netting has graduated horizontal line spacing, which means spacing between the horizontal lines decreases from the top to the bottom of the net.

Electric Netting might be light but it is also very durable. It is built with a semi-rigid material that keeps the net from sagging and shorting out. Good netting also uses stainless steel conductors instead of copper or aluminum. Stainless steel conductors keep the current flowing through the net, while providing superior tensile strength, rust-resistance and permanence over copper and aluminum conductors

Putting the bang into the system

Adding electricity to electric netting requires an energiser. (You cannot simply plug electric netting into a power point and see what happens!) Energisers come in a number of different varieties, and they can be mains powered, battery powered or solar powered.

We have chosen to concentrate on the solar powered energisers as they are by far the easiest, safest and most convenient to us. A mains energise might be cheaper, but who wants to purchase a 100m extension lead to bring power to the net? Simply put, a solar powered energiser requires no set-up, and allows the netting to be used anywhere anytime. All that needs to be done it to take the solar energiser out of the box and clip the leads to the net. The other clip needs to be earthed, and the easiest way to do this is to install the energiser on the top of a star picket and then use the picket as the earth rod.